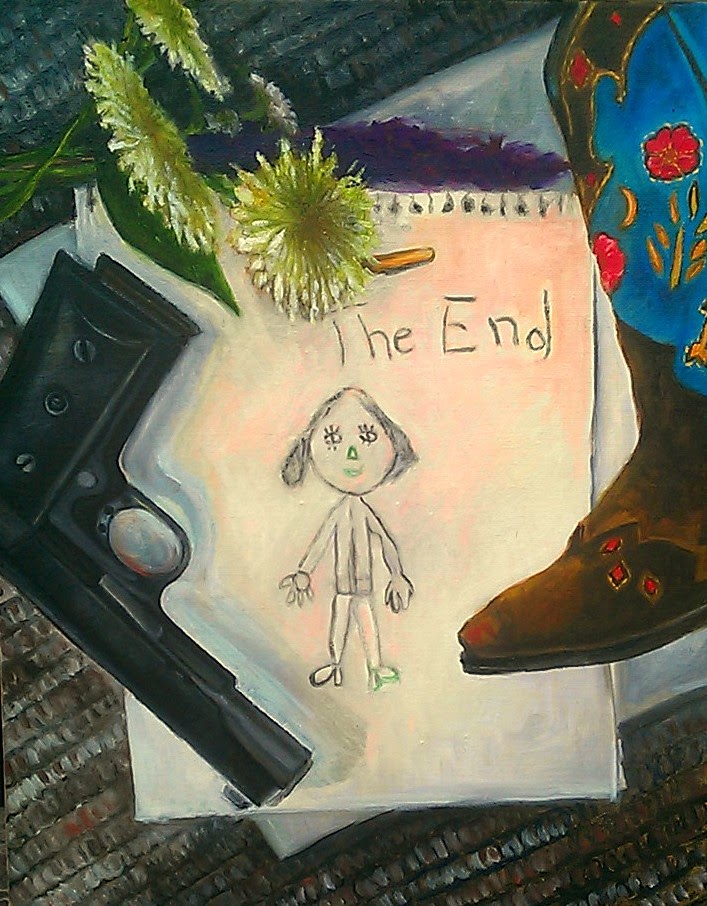 
This is the first painting in a new series of still life paintings I have started.  I don't usually like still life painting, but I had a real compulsion to do a series of them, so I just went with it.  Still life doesn't move, and there is no hurry to get them done (except the flowers dying), and the fact that each and every object can tell a story, even if it's only known to me, is beguiling as well.

I was extremely disoriented and under a whole lot of stress when I began this series, and because of that, I wanted a different approach to doing a still life...so I arranged everything on the floor, and stood over it, looking down.  It gave me the sense of vertigo I was feeling in my life, and the disarray, like when you "hit the floor."  I thought this was more appropriate than the usual passive feeling of peering in and around a "standard" still life, and this was a more flat, dead end feeling, one of more confusion, and less peace.

So, I am basically done with this one, a few little touches here and there maybe, but that's it.  My desktop is down for the count, and my laptop doesn't have a card reader, so until the one I ordered arrives this week, I'll have to make do with photographing this art with my cellphone, always a treat (that was sarcasm folks!).  It's obviously not a high quality photo, and even a bit blurry, but you get the idea.  I'll replace it with a fabulous picture later this week, and then I'll feel like it's "finished" LOL.
at August 10, 2014 No comments: Links to this post