The Rollercoaster that is Life... 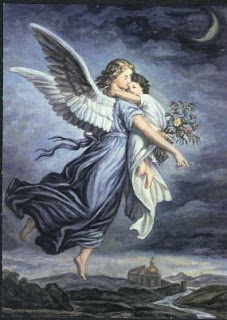 Back to the day in and day out...that's OK.  I don't mind it.  I do have some very big changes coming in the next few months, and I'm looking forward to shifting gear.  Change is hard, but I know that it is the only way to progress into new parts of your life, and continue growing, so I brace against the wind, and run headlong into it!  That's just my style.

I have some shows coming up in the next couple of months, the first in Chelsea in another week or so.  It is called "Idiosyncratic Expressions," and will be on West 25th Street, with the opening on December 1st.  I'll be really busy in the next upcoming weeks and months, and that's always good.

On a sad note, my friend Lori passed away this afternoon.  I was so saddened to hear it.  She had been only recently ill with cancer, lung cancer, and went downhill so quickly, it was shocking.  She was the sweetest person.  I know most people always say that after a person is gone, but Lori literally was.  She was a gentle, shy, funny, witty gal with a heart of gold.  We  bartended together "back in the day," and we remained in contact because we always passed in the same circles, and remained in touch.  I knew she was ill through a mutual friend of ours, and I talked to Lori and planned to go see her this week, not realizing how close to the end she really was.  She died this afternoon surrounded by family and friends.  I'm happy she passed in such a loving way...

She was such a fighter.  According to her oldest daughter, she was drinking coffee until a few hours before her death, and still conscious!  She was beautiful and spunky, with baby blue eyes and a shy but dazzling smile.  Now I don't get to say goodbye to her,  only to her family.  I can kick myself for not moving more quickly, for thinking I had more time.  I saw she was out to a luncheon with friends only ten days ago, so I couldn't fathom she was that close to death.  I am heartsick now.

R.I.P. Lori.  You will be missed.  You touched many lives with your kindness and compassion, and your strong but gentle will.  May flights of angels see you to your rest. 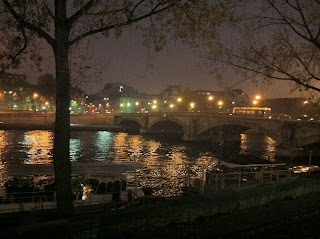 I can't believe it's our last night here in Paris.  I love this city, and it makes me sad to go :-(  The opening of the exhibition went very nicely, and we met some wonderful and interesting people from London, Russia, Dublin, Italy, and other places, so we had a great time.

We did have a lot of fun memories on this trip, from the initial Algerian taxi driver trying to charm us with "sexy time," (eeeeeeeeeeeeewwww!!!) to Jilly and I fumbling around in the Metro unable to get the automachine to take our Euros, all under the disapproving eye of the most French looking Frenchman we saw in all of Paris--it was so comical, I said he probably thought he was watching Ralph Kramden and Norton trying to operate the machine!  Jill was in awe of how French he was--she was waiting for his tongue to shoot out of his mouth and catch a fly!!!  (No offense LOL).  The crowning moment of the day:  when we were in a beautiful little cafe by the Eiffel tower, and the old guy in the seat next to us just started eating bread out of our bread basket.  It was like a friggin Seinfeld episode.  I whispered, "Jilly, he's eating our food!" We just looked at him in surprise, and he smiled and waved.  Jill and I just started cracking up!  It was so damn funny, we laughed until we literally cried.

So, we are going to go out for a nice farewell dinner tonight, and then tomorrow, back to the States.  But, we will be back in the Spring/Summer of 2012, so it is only au revoir for a short time!!
at November 13, 2011 No comments: