The red cat and his girl


The winter always gets me down a little, especially after New Years'.  This year was a particularly mean one, with all of the depressing stuff going on in the world, on every news station, 24 hours a day.  I have retreated into a quiet zone of Gene Tierney, Ava Gardner, Humphrey Bogart, Tyrone Powers, and friends, and also, decided that a painting of fervent love was necessary.  So, I observed our once removed red cat, Dante, and his girl, Maddie.  No matter how many kisses Dante receives, he loves them all.  Never a complaint, never an angry "meow" -- he loves and loves his kisses and his kiddies.  He is a true friend to his loving family.

Initially, I didn't think it much through.  I have really been driven by chiaroscuro these days, and more intense light.  The backlighting on this pose was just to delicious to resist, and a bit unconventional, so I had to just go with it, good or bad.  And, I happen to like the end result--I think the dramatic light worked for the composition, and to show the fervor of their love.

I was once staunchly against the use of black in my paintings, as were the Impressionists, using Van Dyke brown and ultramarine or another combo with Van Dyke brown, if I wanted to achieve a truly dark tone, because I felt black was too flat, and too cold, but I have been employing Ivory black lately, and I feel the warm, brown undertone is really good for dramatic compositions, and so, the ban on black paint is officially over.  My obsession with studying light and it's nuances is really piquing now, so look for more to come, at least in my figure work.  In my landscapes, I'm still about things being bright and airy...I guess it's just a way of pleasantly looking at the world in a state of hyper beauty!

"The sea bird and branches" by Hilary J. England oil on canvas, 8" x 11" The beginning of this year just seemed to ... 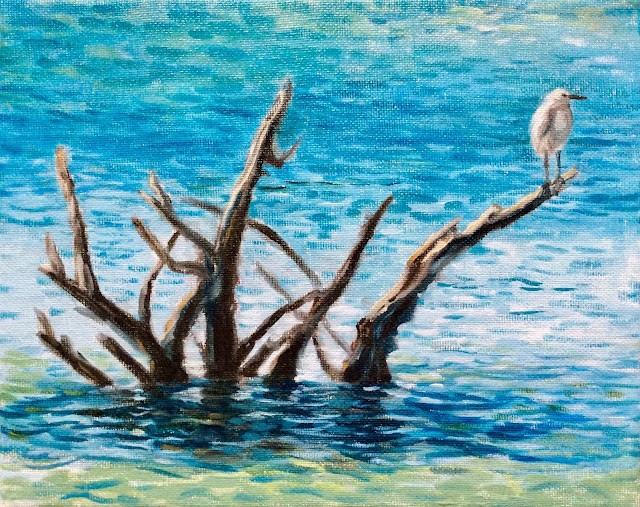