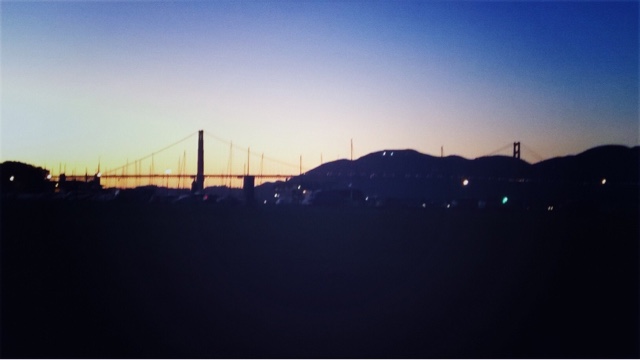 As much as I wanted to dislike San Francisco, I must say, I really enjoyed it.  I thought it would be a Lefty paradise, but I was pleasantly surprised, both by the very beautiful area, and the laid back people.  The city itself is at a pleasant pace, and minus some aggressive homeless people, it really is a very enjoyable city.
Dale and I crammed in as much joie de vivre as we could in our small amount of time here, and as much as I loved the cultural activities such as visits to the local gallery scene, taking in some of the historical sites, etc., the crowning part of this trip was to Muir Woods, right outside of Sausalito, over the Golden Gate.  The redwood forest was so breathtaking, it stirred my soul so deeply, I never wanted to leave there.  It was as if one of those great, old, noble trees, with the nooks and crags and corridors, all of their mystery and magnitude, had a little doorway you could duck into, and be in the realm of elves and fairies, or cross over to some world like Narnia.  It was sublime.
All said, San Francisco seems a breezy town, large enough to rival Manhattan Island in it's sprawl, but minus the frenzy that seems to accompany NYC.  The city has a somewhat empty feel to it, and there is also an decent amount of empty storefronts throughout, along with the large homeless population that is not restricted to the mission, which gives it a somewhat forlorn feeling at times, of a city on the precipice of death, rather than one that is growing.  This city, seems to us, just at face value, a city that is surviving on tourism.  No one we met was a native.
Looking at the stats here, it's no wonder.  The city dwellers, by and large, can't afford to live here, and that puts many businesses under, due to out of control rents, and wage workers that can't afford to live in the city, or even near it, to fill the lower paying jobs.  Socialist policies versus capitalist corruption, and a magic elixir of disaster.  Very sad.
So, I was happy to have visited this very lovely city, and enjoyed the best of what it has to offer, the beautiful views, the easy pace, the yummy restaurants, and then, leave.  That's the best of all worlds!
at November 08, 2015