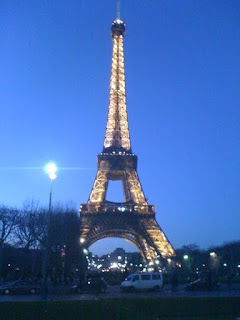 I'm sitting here sipping a glass of wine, the wide window of our flat open, letting in the cool evening air...whew, what a day!

We woke up a little late, and had a breakfast of juice, fruit and croissant, and headed off to the Musee de Orsay. We're now pretty savvy with getting around on the Metro, so we got there with ease.

It had started to rain, but no problem, we have our umbrellas...as we get to the Musee, we see the lines--I mean, it's like nothing you've ever seen in the States--only if you were waiting to get into a pro football game or top billed concert--there were literally hundreds of people, with the lines wrapping city blocks...I was completely aghast looking at what would be a several hour wait to get in--and we are not working with alot of time on this little holiday, so as the rain began to rain on us in buckets, we began to wander along the Siene, with no idea of what to do now that our plans were thwarted--even the Eiffel Tower had disappeared into a shroud of fog...As the rain pelted us harder and harder, we began to bicker and wander, growing more frustrated by the minute--just as the rain began to hit us full force, and our arguing grew a little more heated, a cab rounded the corner and literally threw a waterfall of water onto Mark--I laughed so hard, I almost wet my pants--even after his initial shock and rage, he had a good belly laugh at it...and then, the rain stopped as quickly as it started.

We found we had wandered, quite unintentionally, within a few blocks of the Eiffel Tower--much to our delight and surprise. We just followed the direction of the tower, and just kept moving, every few blocks seeing it would loom larger...as we got very near to it, it seemed to disappear--we were dismayed, and as we contemplated stopping to check our map, we turned the corner, and there it was...I mean, THERE IT WAS. Magnificent and beautiful, it stunned me with it's size and grace...it was quite a moment for me.

We entered the park around it, and it was somewhat empty due to the earlier weather. We had a little language barrier trying to buy our tickets in...and Mark and I, in our American naivete, thought the line for "escalators" meant that--as if there would be an escalator in the Eiffel Tower! Well, the Eiffel tower has two levels, and then the "summit"--we began our ascent, and it was SCARY, since the steps are metal and wet, but the French ran up like it was nothing, so we tried also. We were literally ready to drop dead by the time we reached the first level, which is about 300 feet. The observation deck was a welcome reprieve, and we tried to catch our wind and with much trepidation, would scale the next 200 or so feet to the second deck...if we survived, and there, take the elevator, or "terror" to the top. Mark looked at me anxiously and asked, "Are you quite sure you want to do this?" I laughed and said, "Sure...I guess.." I mean, how could we say we chickened out of going to the top? But, the weather decided our trip for us--much to our secret relief, the "summit" was closed due to high winds, so we smiled, took some pictures, and moved on from there.


After leaving the Eiffel Tower, we wandered the local streets, a beautiful, wealthy quarter, and we were pretty hungry after all the walking and climbing, so stopped in for authentic "Chinois"--after all, we had to try French Chinese. It was surprisingly good, and after a pot of hot tea to reheat our soggy forms, we were off and running to find the Arch of Triumph and Champ Elysees--we figured out the route with our metromaps, and went looking for the nearest metro station. After hopping on and realizing we were heading in the wrong station, we jumped off and reboarded, and got off at Charles DeGaulle Square, right in front of the Arch of Triumph. The square was insane with people and cars, and Champ Elysees was lit up like a blue Christmas tree--it reminded me of Times Square with the thousands of lovely blue lights, bustle and stores. Pretty neat, but very congested. We spotted the second McDonald's we saw in ALL of Paris, that's right, only two in all of our travels, and decided we had to taste a burger just to see what a french Micky D's tasted like. Guess what--exactly the same as America. It's like they fly their hamburgers over here...not an appetizing thought, lol. The array of characters was enormous, from street performers to boys walking around in blue dresses, with blue hair. What that is supposed to mean, I don't know, but at least it doesn't have much chance of catching on with any of our sons in America LOL.

We made our way through a huge Christmas fair on Champ Elysees in full swing--we smiled at the different food stands--chestnuts and wine, duck "sandwiches", foie gras, crepes, and of course, more wine. We extracted ourselves from the crush of people, and made our way to the Palais, and the famous Pont Alexandre III bridge, and then headed to the Metro, since we were now pretty exhausted. After a grueling last set of stairs, and a stop in the local supermarket for some eggs and groceries for tomorrow's breakfast, we were barely able to crawl up the two flights of stairs to our flat.

Moral of the story--if you come to Paris, you'll see why the Parisiennes are all so thin--you're going to walk and climb about 30 miles a day if you go it the "Parisienne" way...wow...lots of footwork, but well worth it.