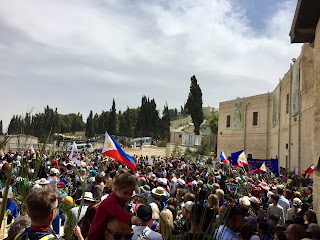 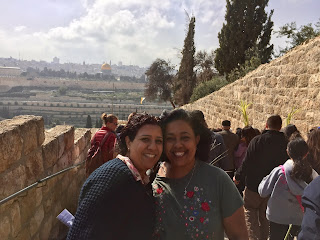 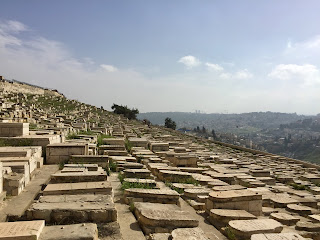 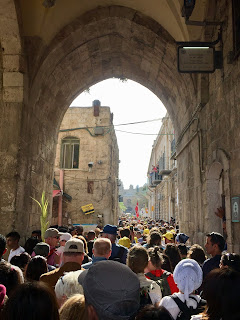 Despite being on my fourth day in Jerusalem, this was the first day I had officially planned any activities.  For the first three were travel, getting settled, and then Shabbat.  Today, I had plans to go to the Palm Sunday procession from the Church at Bethphage, the Mount of Olives, to the Church at St. Anne's, within the walls entering through the Lion's Gate.  I knew this was a four to five-hour procession, with thousands of people, and it was really something I was interested to do, despite not really being a big fan of crowds.  But, hey, you only live once!

I began plotting out this event because it would require me to take several buses to reach the Mount of Olives.  It was in the Arab/Muslim controlled part of Jerusalem, and that was also a bit thorny.  I decided to just go for it.  I tried to read up and research the "ritual" for the bus-- where to get tickets, etc.  Apparently, there is a lot in flux still in Jerusalem, and buying what's called a Rav Kav ticket is not quite as easy as I thought.  I decided not to overthink it and that I would just figure it out as I went along -- you know -- wing it!

So, I walked to my designated bus stop, boarded the bus, and the bus driver was very cool, he gave me further directions, and sold me a Rav Kav "anonymous" ticket (meaning, it's for monthly passes, etc., but you don't need ID) right on the spot.  I followed his directions, changing buses at the first designated spot, and then I reached the Damascus gate, where I was supposed to board the bus numbered 255 for the 17 stops out to the Mount of Olives.  When I got off at the gate, there was a crush of cars, buses, etc., but no bus stop.  Some older men pointed me towards the Muslim minaret, and said, "there is the bus depot to the Arab quarter."

I walked over and needed to purchase a different ticket because the Jerusalem bus system is different than the Arab bus system.  I boarded the bus and realized I was literally the only non-Muslim on the bus.  I brushed it off.

As the 50-minute bus ride wore on, I felt increasingly uncomfortable, looking at the landscape.  It was SO Muslim.  Yes, so Muslim.  I began to worry.  What if I get off at the wrong stop? I shuddered.  Thoughts of mayhem began to creep into my mind.  I felt a few butterflies of fear in my belly.  I stared straight ahead, as the Muslim man behind me stared hard at me, his expression was inscrutable.  I tried to think of nothing.  A moment later, an older, very well-dressed woman, NOT in Muslim hijab or garb of any sort, also sat staring at me.  She was also a Muslim, but different.  What did she want? She stood up and wobbled over to me, and asked, "Are you going to the procession?" I nodded.  She said, "Good me too." She looked at the Muslim man who was staring and said something sharp sounding to him in Arabic.  He looked away.  She turned to me and said, "We Christians have to stick together. We are the minority here."

A few minutes later she said, "This is our stop." I could see the church and the crowd, and I felt a tremendous sense of relief.  We unboarded and parted company, as she was going to the convent to visit her sister.

I walked into the complex, and it was awash with color and happy singing, and faces of all colors and ethnicities.  I felt a wave of happiness wash over me -- just look at all these different Christians, different sects, but here they were, happy and joyful for the day!  I walked around and saw a little restaurant area.  I ducked in to grab a cup of coffee because the restaurant was surprisingly empty.  As I did, I saw two Arabic women sitting in the corner, chatting.  When I approached, I heard them speaking English, very well.  I don't know what possessed me, but I walked straight up to them and said, "Hello! Where are you from?" The stopped and looked at me and smiled, and said, "Canada before, but now we live here, in Bethlehem. And you?" I said, "I'm from America--the Northeast, in Pennsylvania." They became enthusiastic - "We know Pennsylvania!" They grabbed another chair and said, "Please, join us!"

And so, that started my day with Gladys and Nargys, my two new Arabic Christians friends from Bethlehem.  We stayed together the entire day, walking the procession and chatting and laughing.  They told me about their families, their travels, their hobbies, and I did the same.  We showed photos of our children, grandchildren, family, pets.  They laughed and told me the cultural idiosyncrasies of Jerusalem and the surrounding areas.  They were solemn when they told me of the persecution they suffer for being Arab Christians.  They each spoke four languages, and I was amazed at them.

We walked along with the Arab Christian section.  They sang their songs in Arabic -- and it was melodic and relaxing.  They laughed at some of the others with their crazy antics, and I appreciated that too.

We finally made it to the Lion's Gate, with us making entry, and people throwing rice and flowers on us in joy from the balconies above.  It was close to mayhem with different groups all trying to "out sing" each other in different languages.  The procession made a turn into the courtyard of St. Anne's to regroup.  We decided we would not stay on for the additional hours of singing and festivities, as we had been traveling for four hours, and we were hungry and needed a restroom.

We went on into the Arab section behind the wall, stopping to haggle for this and that, and then Gladys and Nargys treated me to an authentic Arab dinner.  We ate a delicious dish called "knafa" -- which was goat cheese and candied nuts.  It was really amazing, and they gifted me with some to take home, as well as two loaves of sweet bread that Nargys insist I try.

Finally, Gladys said her husband was meeting her at the Damascus gate and kissed us both goodbye.  I traveled on with Nargys, as we rode the bus back -- I got off at Machane Yehuda, and she went on to City Center, to catch the bus to Tel Aviv for the evening.  We had exchanged information earlier, and they had very kindly offer me to come to Easter dinner at their mother's home in Bethlehem.  I told them I would consider it!

All in all, it was a wonderful time of exploration and meeting new friends in a new city.  That always makes for a fine day!