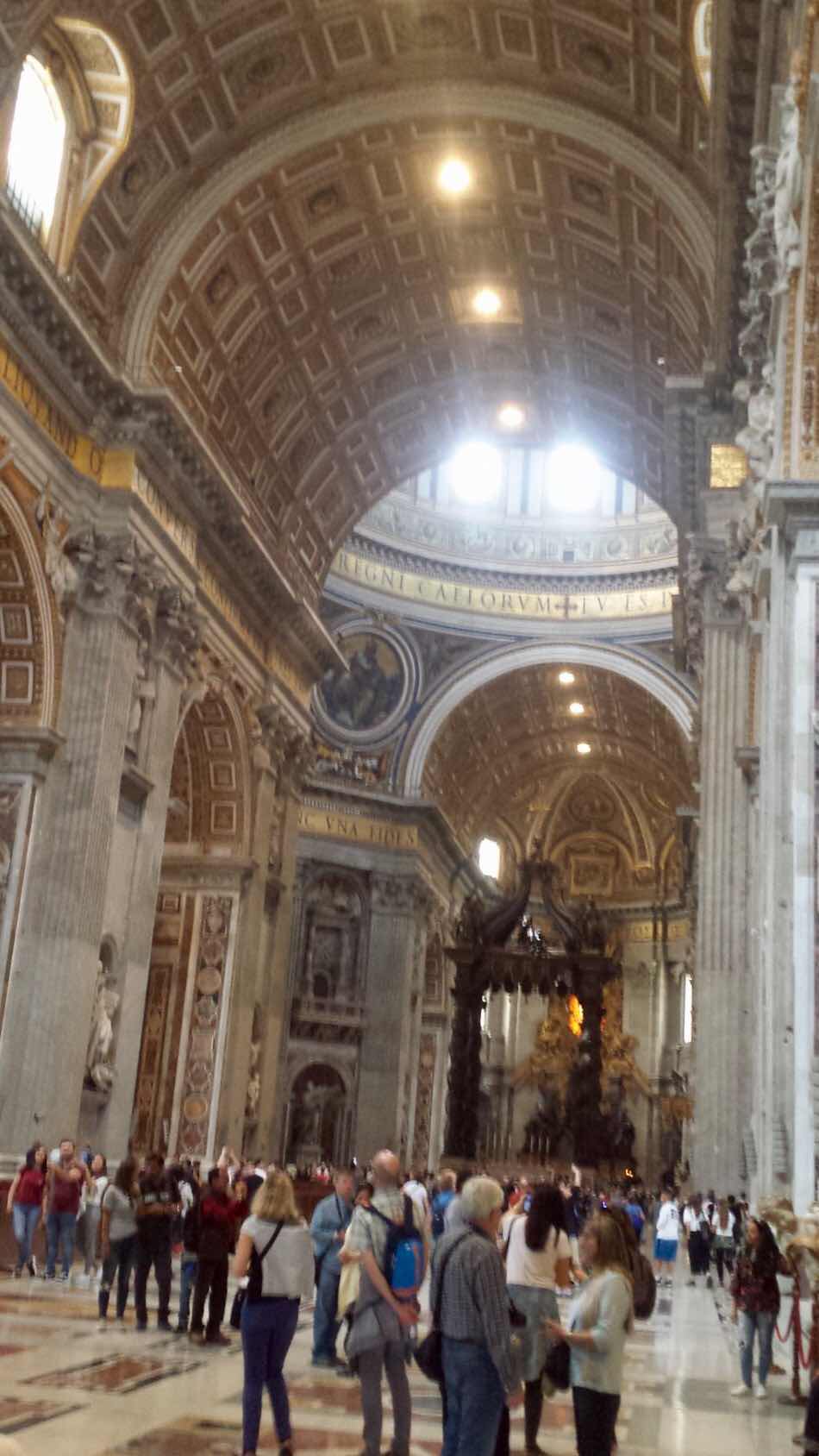 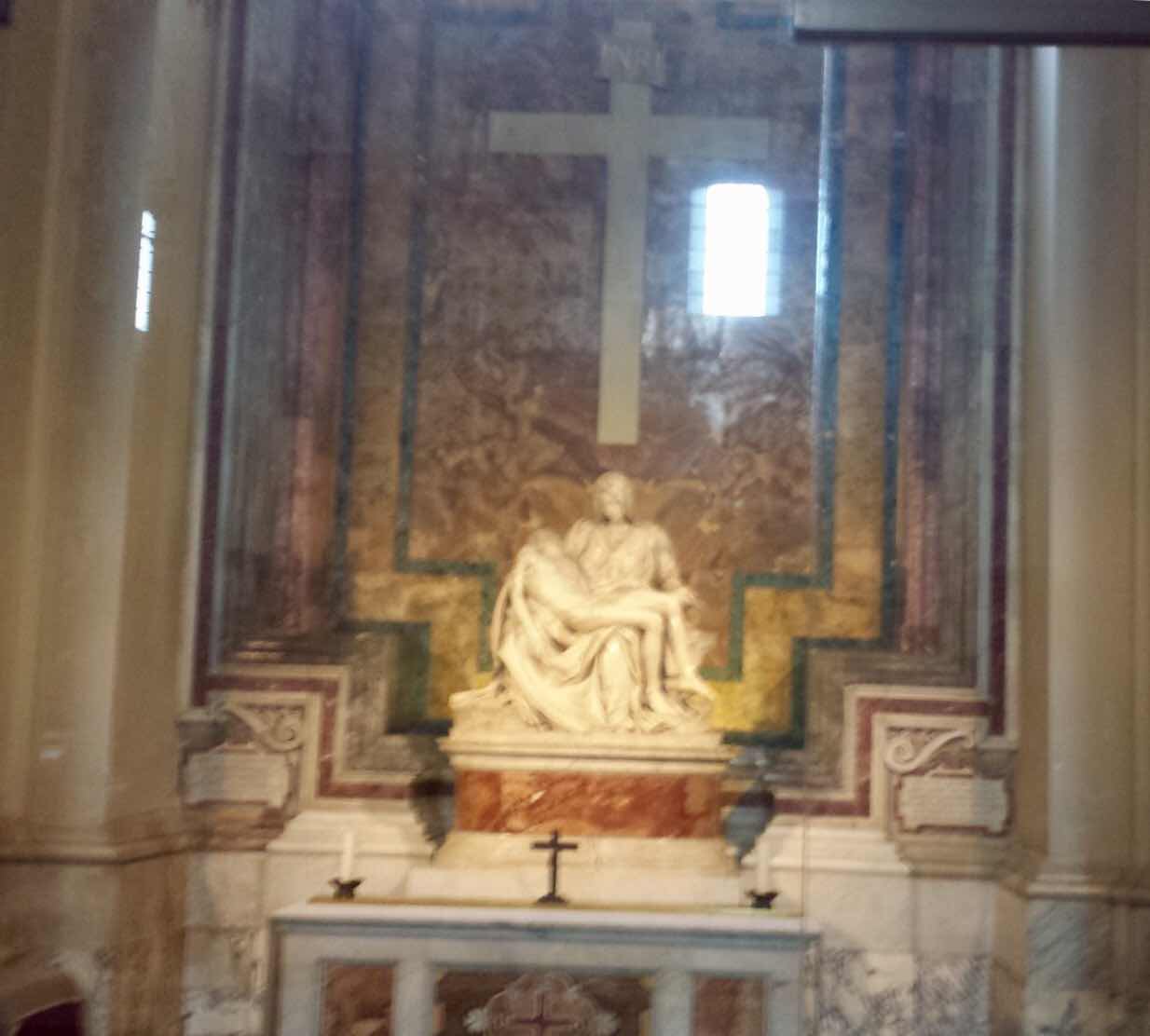 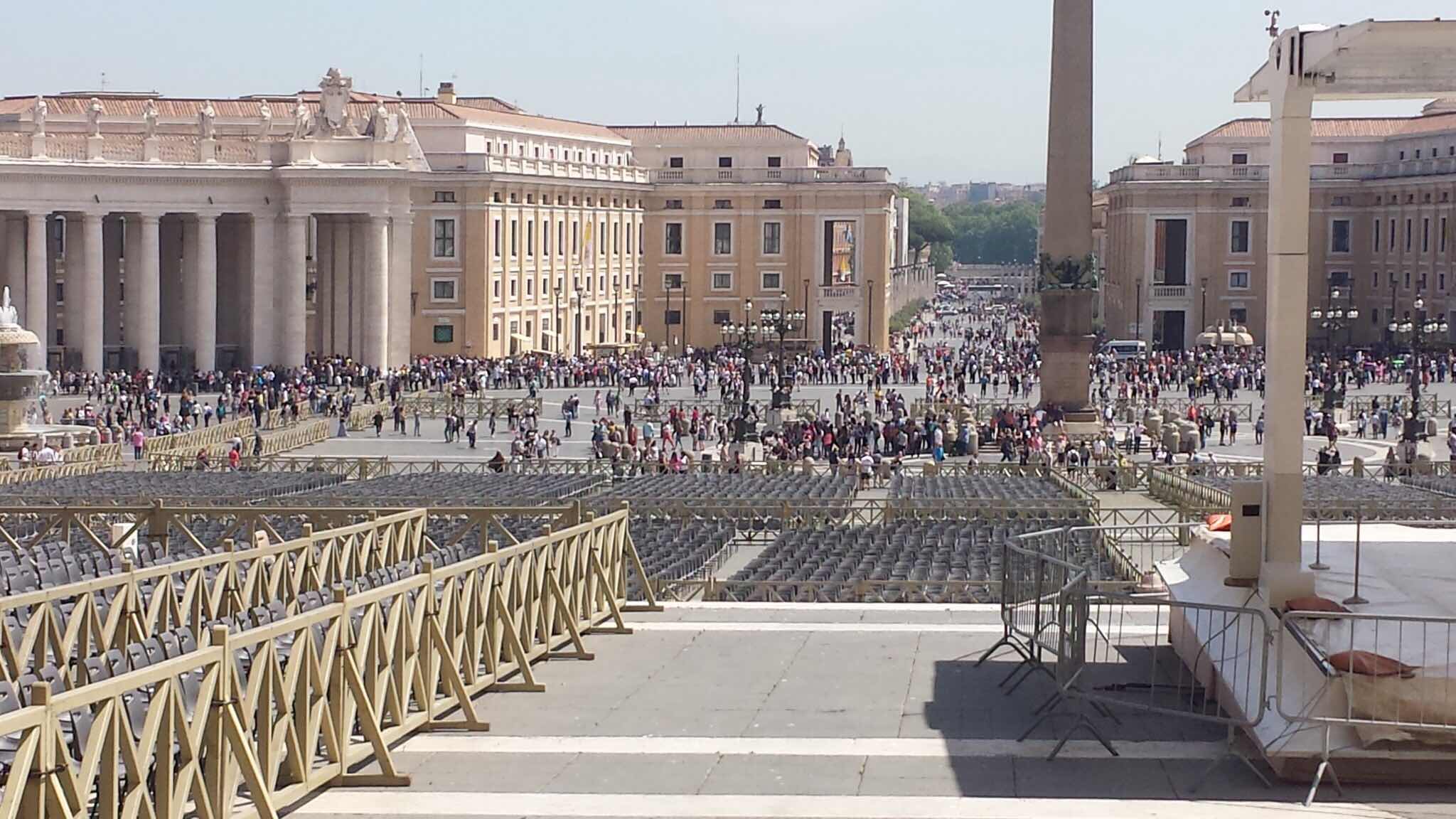 I spent the day in Vatican City, and although it was immensely crowded -- it was well worth braving the hoarde of humanity.  I started the day meeting up with a tour group going in -- I decided to invest in one of the "skip the line" tours, since the wait to get in as an individual was hours long.  If you forked up some dough, you bypassed all that, and got a guide to boot -- so, I decided to pony it up.
"Pino" was our guide -- he was very charming and very knowledgeable.  He took us all the way through the entire Vatican for a nearly 5 hour tour.  We started by going through metal detectors and screening of our purses/packs like in the airport, minus the plastic basket, so my purse got destroyed by one of the straps getting ripped off by the conveyor belt rollers -- leaving me to carry it around for the rest of the day like a baby.  Not a good way to start the day haha.
But, things got considerable better as we toured through the Vatican -- the history of it is amazing.  Hall after hall of tapestry and amazing artwork, by Leonardo, Raphael, and many other great artists of the past.  They even had a modern art section with the likes of Matisse and Chagall contributing to it. It was very impressive.
We made our way through the various antechambers for the Pope, with much backhistory and a lot of formalities, until we reached the Sistine chapel -- which is just one huge room with all of the amazing Leonardo paintings decorating it.  We sat in there, hundreds of us, while a voice would yell "Silencio" at us every few minutes. It was actually kind of funny. But, the art was amazing, as was all of the symbolism, as explained thoroughly by Pino, who knows more about the Vatican history and intrigue probably than any person on the planet.  It seems to be his life's work, and so, we were treated to a very thorough history.
Once we reached St. Peter's basilica, it was the end of the tour -- but I was able to see the "Pieta", and most importantly, get a glimpse of the Apostle Peter's tomb.  To be honest, this was literally the most important part of the entire trip.  It was overwhelming to know that the Apostle Peter was there.  I was so humbled to be in the presence of his tomb.  Peter -- the Apostle who walked with Jesus.  It still is amazing to me I was able to see his tomb.  There was many tapestries and carvings about his fate of being crucified upside down, and all of the circumstances surrounding his martyrdom, as well as Paul's -- but Paul was not there -- his tomb is more sketchy -- I read somewhere they recently confirmed he is also buried in Rome -- but not with nearly the "pomp" that Peter is buried with.  There were many references to Paul in the Vatican -- both he and Peter had many narratives and paintings and artworks dedicated to their service.
After I left the Vatican, I had a light lunch of tomato and mozzarella salad, and then headed back to change bags and do some painting by the Tiber.  I managed to get a quick painting done that was not to my liking so rather than sending it floating down the river, I just headed back to do some prep work for tomorrow's outing -- confirming my passage to Pompeii.  <3
at April 27, 2018

Email ThisBlogThis!Share to TwitterShare to FacebookShare to Pinterest
Labels: rome, the Vatican, travel