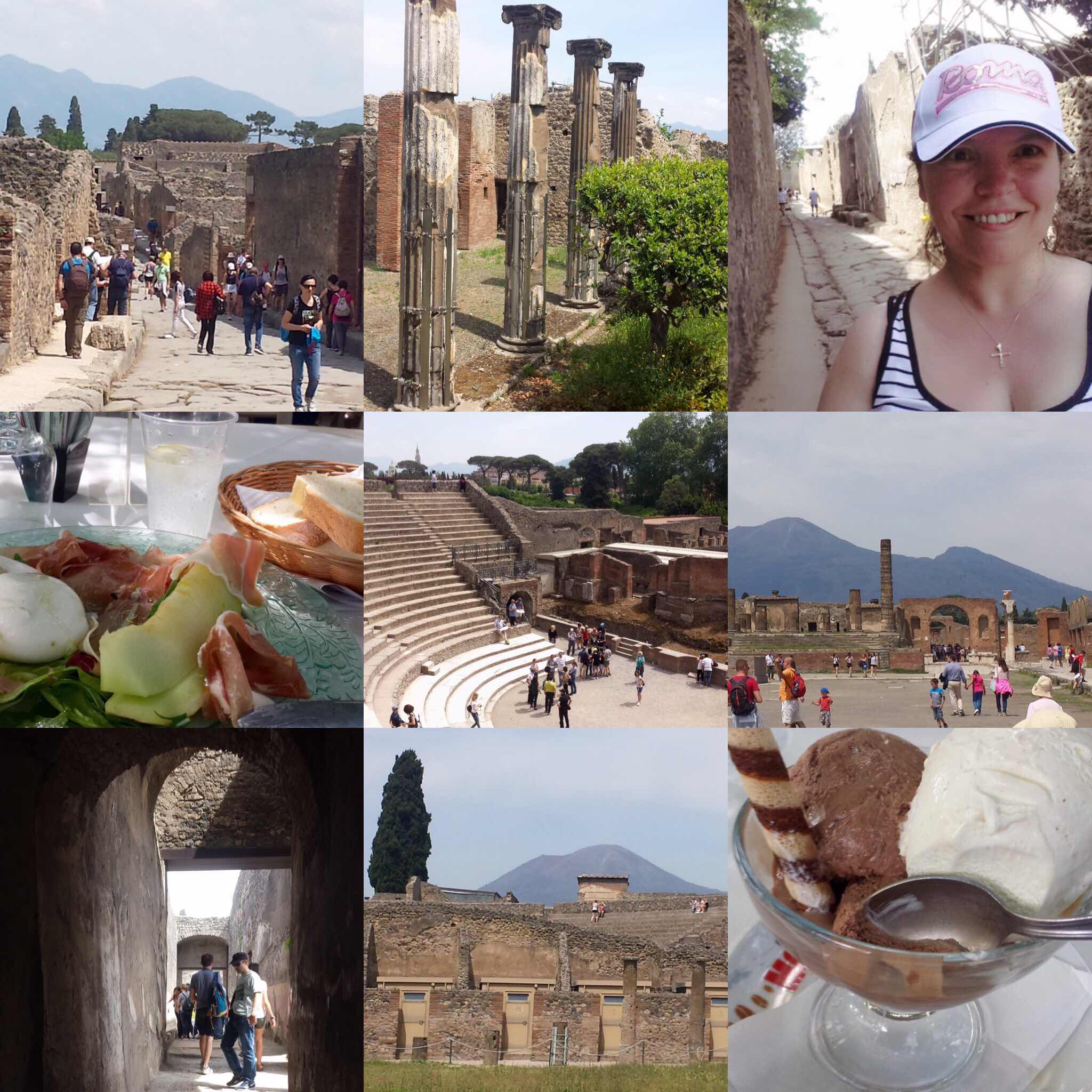 I was always intrigued and amazed by the story of Pompeii, and also, I had heard how beautiful Naples is, and how the food kicks butt, so off I went.  It is almost 4 hours from Rome via shuttle, or an hour and a half on the high speed train.  I decided to do the high speed there, the shuttle back (to see the countryside).
Pompeii was an overwhelming site -- it is very large, as it was a large town/city (with amazing walls!) and it was just so interesting, fascinating, and sad. The city was very lavish, with their own sporting arena, a drama/arts amphitheater, coffee shops, wine bars, even a gym and spa that boasted hot and cold plunge pools as well as a weight training area.  The homes layouts were gorgeous, with many of the frescoes still intact.  It's just amazing to me that it was all instantly covered when Vesuvius blew -- and now, two thousand years later, we can walk through and envision it.  As I was wandering through the streets of Pompeii -- a very handsome (and very YOUNG) Dane named "Henry" began chatting with me, and he accompanied me along for a good portion of the afternoon as a sort of guide.  He was on his own, and I think he was a bit overwhelmed.  He invited me to lunch, but I declined.  He was literally my son's age -- that was amusing, but also kind of horrifying LOL.
Naples is beautiful with the dramatic Mediterranean coast line, the pastel earthen colored homes and buildings, and of course, the amazing food.  I found an amazing restaurant (on recommendation) that not only boasted wonderful food, it was so cool and refreshing under an arbor of beautiful flowers.  It was very hot, hazy, and humid, so I ordered a plate of melone, prosciutto, y mozzarella -- honeydew, "ham", and a fresh mozzerella ball, served on a fresh bed of greens.  Couple that with the most amazingly fresh olive oil, crusty local bread, and sparkling mineral water with a wedge of lemon -- and I was in absolute heaven.  The service was excellent, and it was a long meal of almost an hour and a half, and finished with the best tasting dish of chocolate and vanilla gelati I have yet to taste.  I was literally in Nirvana.
After, I headed to the shops to buy a couple of very nice little  "take away" gifts for my special peeps, and then went to the bus meet up to head back to Rome.  It was a nearly four hour trip (air conditioned thank goodness) and the countryside of Italy was spectacular -- in full bloom.  The country is very well maintained -- clean, and not a lot of strip malls and ugly BS.  I was very impressed.
After I disembarked at Via Cavour, I took the metro back to Cipro where I was staying (outside the walls of Vatican City).  I wanted to kick around a bit, but I realized i had to pack up and do some last minute things, and my cab to the airport would be picking my up at 345 am -- to make my 6 am flight to Athens -- and I should probably squeeze a few hours in of sleep.  So, that's what I did.
And Ciao for now, Roma!!
at April 28, 2018