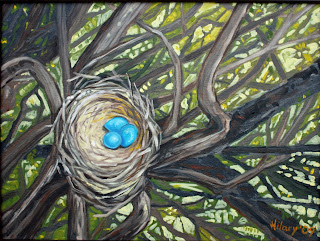 We have a tornado alert in effect for the next hour...it's kind of laughable, since we live in Schulykill, PA.

Aside from having my power knocked out several times today, still no sight of it! Anyhoo...above is my latest painting--it's called "The Secret" and here's the tidbit behind it: I was doing yardwork and I started to get divebombed by a crazy robin, and I know birds don't generally carry rabies ;-) so I figured I'd find out what I did to irritate it so badly...upon some perfunctory inspection of the area gutters, and a large hedge, I found the "secret." Her nest--she was defending her nursery! It was better than an Easter egg hunt! I quickly left the area so she could go back to attending her nest and not abandon them altogether...

I've had a dickens of a time photographing this last painting, maybe since it's a high contrast painting...the darks and lights don't come through balanced like they do in the actually painting...it's a reflection issue, even though I'm not using flash.

Anyway--I've done the best I can in terms of photographing it, so now it's time to post it to eBay, Etsy, and all the other sites---going up very low, with no reserve price, so now's the time to go bid!