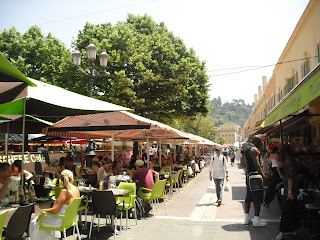 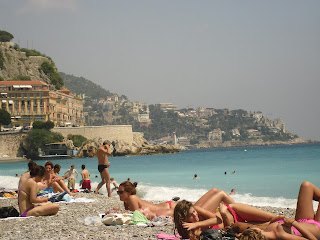 The weather was quite warm today, and the sun blazing high and bright.  Due to jet lag, I fell asleep at 8 pm local time, and woke up at 2 am, unable to fall back to sleep until nearly 5 am, and then, slept through almost to noon! I guess I really was wiped out.

Then, I woke up disoriented, and upset about having slept as long as I did (typical American!).  I hastily washed and dressed, and headed out to explore a bit, and then to the beach.

The stores are plentiful, with everything you can think of being sold.  Souvenirs, trinkets, and more beautiful handcrafted items such as leather purses, and then the high end stuff.  I admired this all as I walked along, and then I headed into a McDonald's (yes, shame on me, and there are plenty of fast food places here, including KFC, unlike Paris, where fast food chains are scarce), and I got a coffee to go, and a package of sliced apples.  I noticed the oddity here--you can get a Heineken with your Burger Royale or Big Mac--I got a laugh out of that.  Beer at McDonald's.

I headed into a dollar store (yes, they have them here too, except everything is 2 Euro instead of $1.00) for a few little comforts for the beach, such as a straw mat, a straw hat, and a pad and pen.  Well, the search for a writing pad was on--the dollar store had pens, but no pad or paper. They did, however, have a section of Pornography and discount sex toys.  I was in complete amazement by this.  Even water pistols in the shape of penises and breasts (very odd).

Anyway, after my lesson of beer in McDonald's and Dollar store sexual eccentricities, I was off to the beach.  I got down there, and got settled in as best as I could, since the beach is literally entirely smooth, round rocks.  No sand, just rocks.  Makes things very interesting, especially trying to navigate them on bare feet.  You would think it would not be uncomfortable, but it is, very.  I saw a few people fall down, and made a resolve that wouldn't be me, haha.  When you get to the water, you nearly have to dive in, because the rocks get harder to navigate rather than easier, so most people just try to plop into the water without looking to clumsy.

The water is heavenly, so the trudge to it is worth it.  Hours of peace as you literally float in the azure blue.  Here, there are no lifeguards, so people swim WAY out, and there is lots of horseplay in the immediate surf with kids slinging footballs, splashing, and making human pyramids (I guess the trick is to stay up despite the rocky bottoms).  Vendors walk up and down the beach selling water, hot peanuts, beer, cold wine, cigars, and people just lounge and eat, drink, and smoke.  Like we used to in the United States before we became subjects of the Nanny State...also, people are VERY tan here.  Another "No No" stateside.

As I sat around, a few people struck up conversations, particularly a German student from Paris, working on her Master's degree.  Her name was Lydia, and she was very congenial, and we talked of all sorts of art and culture.  She was here on a short vacation, and hoping to go to the United States to complete her education. She was a little dismayed that she was having problems obtaining a work permit in the USA.  I told her to go to Mexico and cross into the USA illegally, and all of her problems would be solved.  She looked confused, but I ruefully laughed and told her it was a joke that would take a native to the USA to understand.

So, I'm back now in my hotel, relaxing, and looking to head out in a little bit.  Lydia invited me to join her for dinner, but I declined.  She also said if I would like to meet up later, she and another girlfriend of hers would be at the ice cream stand by where we were, listening to some music.  Maybe I will, maybe I won't.  I get paranoid about "meeting" with people in foreign countries, no matter how innocent they look.  I shouldn't have read  "The Journeyer" all those years ago, LOL.