Day 9 and 10 Piraeus to Santorini 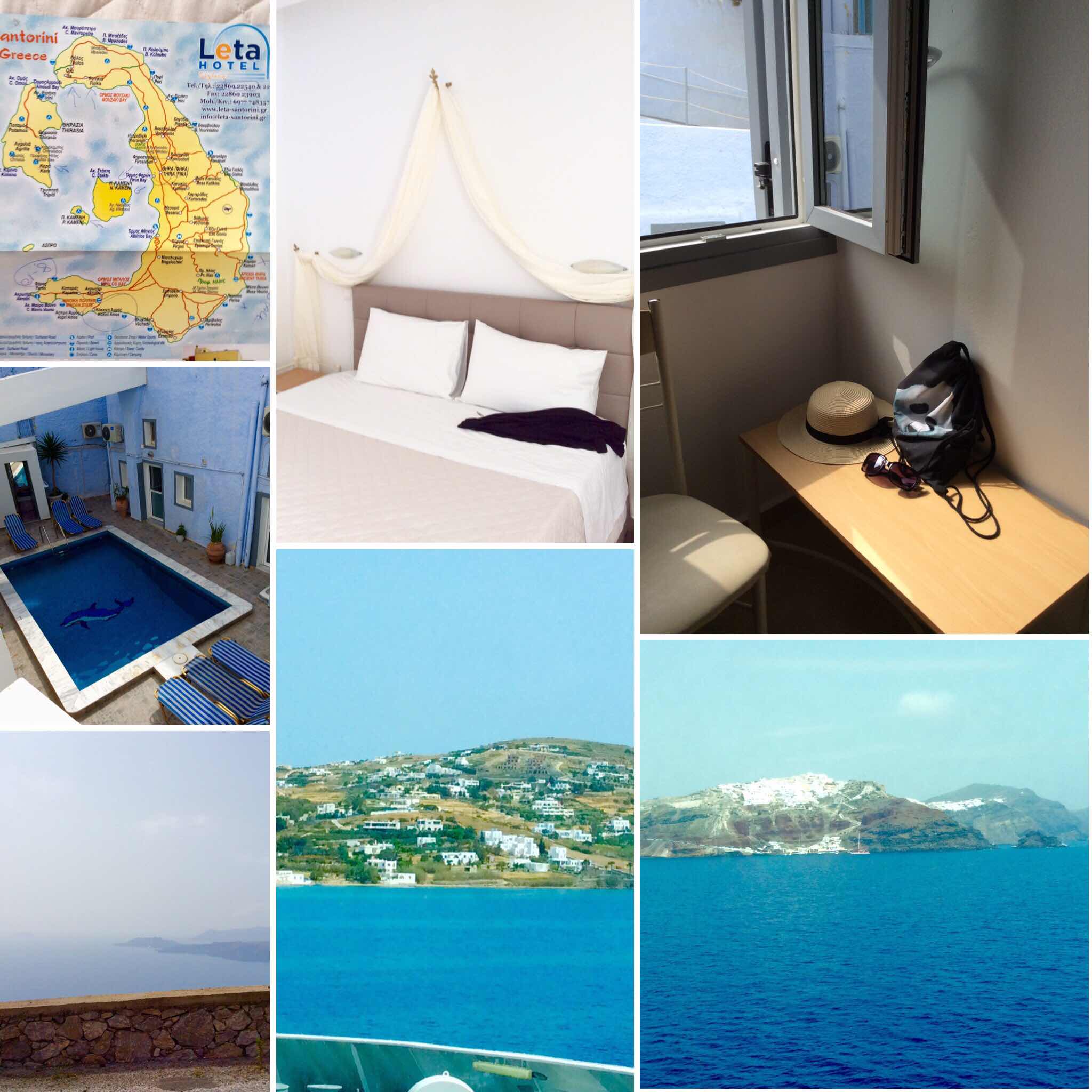 I spent the night in Piraeus, in a hotel I initially was horrified to be at -- when I first walked up to the hotel across from the Ferry port, there were two chain smoking Russian chicks at the desk, and a few raggedy looking mutts lounging about in the reception -- none of which budged when I strolled in.  My driver looked around and basically made the sign of the cross as he gave me a desperate look and ran back to his Mercedes (I guess he was afraid someone might take off with it).  For the first time in my journey, I felt a pang of anxiety.  What did I DO coming here??  I swallowed that fear, and proceeded.
The Russian women were pretty nice and helpful -- first appearances aside -- and told me there was an actual Cunard office around the corner, and I could take my online voucher and get my ticket ahead of time, thereby jumping the line in the a.m.  -- this was a big help.  The flea motel actually had a service elevator, and wifi, and with my key -- they sent me on my way to my second floor room.  As I got out of the claustrophobic elevator, the hallway had a stench of stale piss mixed with bleach -- not pleasant.  My senses went off again as I walked the long dark corridor thinking, "I could probably get mugged in here".
Upon opening the room, I had mixed feelings -- first was relief that I was in and I could lock the door and next thing was to inspect for bed bugs.  The room was old, pre war, with high ceilings, and pleasantly, had a private balcony that looked out over the harbor  -- the doors were open to a patio set and the long sheer curtains were gently blowing in the wind -- this instantly put me at ease.  I began to check everything out.  The bed was a plank/platform, so there was no boxspring, and also, the queen size mattress was quite new, and no evidence of bugs.  A sigh of relief.  The wifi worked.  Good, and there was a little working fridge.  So, although it was very Spartan (haha pun intended) -- the a/c actually cranked as well, and was extremely quiet.  The last thing I worried about were roaches -- I stood in dread before entering the bathroom, with visions of waterbugs coming up from the drains -- but I saw no evidence of anything, and after all was said and done, decided I could stay the one night, and not be too uncomfortable.  There were double locks on the door, for security, and with that, I settled in.
I actually passed a decently comfortable evening, and with no regrets, headed out at 6:30 am across the street to board the Blue Star ferry that would transport me the 7 hour journey to Santorini.
The journey across the Aegean was comfortable, but still, as with all transportation, it has its foibles.  Crying babies, grouchy people, lines for the bathrooms, etc., a few spells of choppy water that initially gave me a moment or two of vertigo, but nothing too severe.  I was very happy to arrive in Santorini, and find the hotel driver waiting for me in the front of an ocean of other hotel drivers.  He took me the precarious 30 minute drive up the mountains  to the hotel, where I was promptly greeted by a cordial hotel owner named Sophia.  After straightening out yet another glitch that would have left me homeless for an evening (they had me booked for one less night than I actually was) -- she showed me a map of the area, and the lay of the land, and showed me to a very pleasant room for myself -- and I can tell you -- I am happy to be checked in and able to relax.  As I sit and unpack and reflect, there's an almost odd feeling of emptiness to come out so far and be so remote into the sea, but the people here seem to be happy, and that calms that somewhat unsettled question of what do they do and how do they stand being so disconnected? I don't know if I could live on such a remote island, even as beautiful as it is -- so there goes the idea of being a castaway haha.  I have an exploration planned for tomorrow morning so now to shower off this day's "travel' and just chill for the evening.  It's overcast here, and rather cool, at 68 degrees F, with some thunderstorms in the forecast for tonight, and I don't mind that at all, because hopefully tomorrow it will be sunny as predicted!
at May 04, 2018