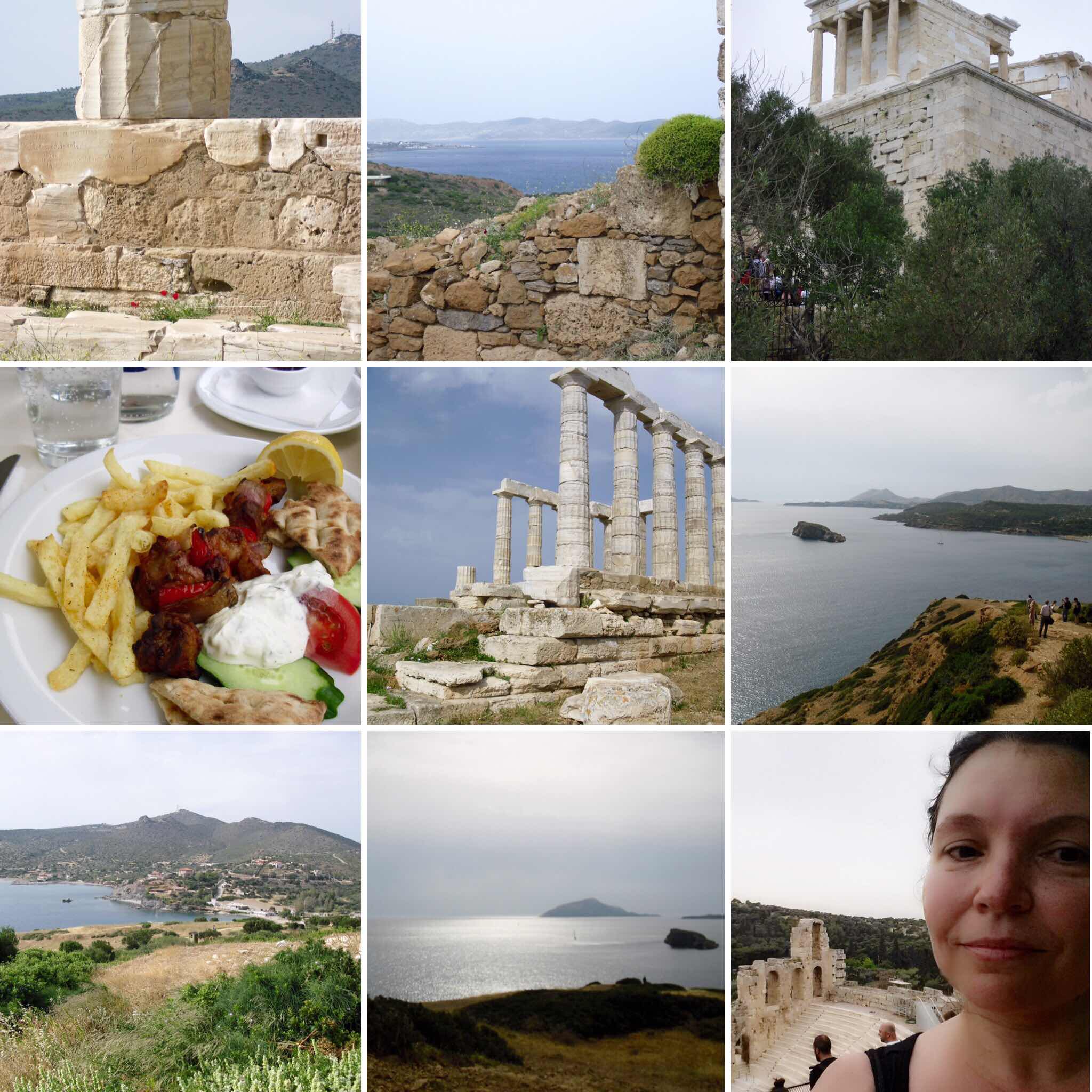 Day 6 started off gray and windy, with a few showers, but that did not dampen my enthusiasm.  I started off with a traveler's snafu: the cab app I had downloaded did not work in Athens.  I had to meet a tour group across town in an hour and I literally had no clue how I was going to do that, without a cab, or lay of the land.  So, I was determined to not miss the group -- and on a wing and a prayer, I did a quick Google that showed there was a Metro tram that would take me within a few blocks of the meet up.  So, I ran down to the metro station, got on the line, bought a ticket, ran back up to the tram station, rode the tram the Google allotted amount of stops (which were incorrect) -- got off at the wrong stop, asked several people along the additional nearly kilometer I had to walk (through some shady areas too) and finally, all sweaty and flustered, arrived 15 minutes early for the meet -- so I could sit down, catch my breath, and enjoy some air conditioning.
The rest of the day was nice.  We visited some of the major areas of the city, and during this time I met with a few other solo travelers, one in particular was a very nice 30 something year old Nurse named Brooke from Sydney.  We ended up buddying up for the day, enjoying lunch together, and seeing all the sites.  It's funny how that works for us solo travelers-- We meet up, have a great time, go our separate ways, and never see each other again -- it's a traveler's "one night stand" minus the sex and sadness hahahahaha
Later, we traveled out the hour and a half to Poseidon's temple at Cape Sounion -- and what a beautiful site that was.  The best of trip.  It was so beautiful and peaceful -- with the sun beginning to set over the Aegean Sea -- the music of soft, gentle breezes, and sweet low chirping of little quayle that live on the rocky coastline.  I could've stayed there forever.  The ancient lore has it that this was the cliff that King Aegeus jumped from and killed himself, when he thought he son Theseus was dead.  Theseus had gone to Crete to kill the Minotaur under the cloak of night, and had black sails on his ship for cover.  King made a pact with Theseus and his group -- if Theseus killed the Minotaur, they would change the sails from black to white, and the King could see from a distance that his son was alive.  But Theseus fell in love with a Princess after killing the Minotaur, and in his delight and distraction of his love, forgot to change the sails from black to white.  When the king saw the approaching ship had black sails, he despaired that his son was dead, and he threw himself from the cliff into the sea.
After the trip back to Athens, I was pretty exhausted.  The day required a lot of climbing, and as expected, my pedometer clocked over 7.4 miles of walking (much of it climbing) so I was ready for a hot bath and some relaxation -- which is exactly what I did when I got back to the hotel.  And now, goodnight!
at May 01, 2018